Ashbel Smith Letters
JavaScript is disabled for your browser. Some features of this site may not work without it. 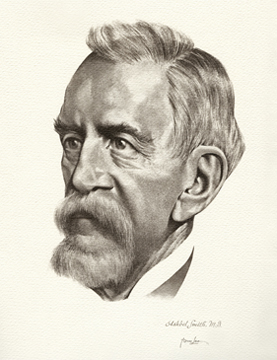 Ashbel Smith, doctor, scholar, statesman and soldier, was born in Hartford, Connecticut on August 13, 1805. After he graduated from Hartford Public School and Hartford Grammar School, he earned his bachelor and Master of Arts degrees from Yale College in 1824. Following a year and a half teaching, Dr. Smith returned to Yale to study medicine. In the spring of 1828, the school awarded him a medical degree. He was especially interested in surgery and in 1831 he decided to study medicine in Paris. In 1832, during the Paris cholera epidemic, Dr. Smith treated the sick, publishing a pamphlet on the disease in 1833. Upon his return to the United States he practiced medicine in North Carolina for a short time. However, Dr. Smith remained restless and torn between his desire to render humanitarian service or to devote his energies toward becoming a “vigorous intellectual pioneer.”

In 1839, Galveston suffered a severe yellow fever epidemic. Dr. Smith spent long hours treating patients and maintained meticulous case records. He strongly advocated that area marshy lands be filled and that the removal of filth would help prevent future outbreaks. In his work, Account of Yellow Fever in Galveston in 1839, Dr. Smith published his findings on the epidemic. This work was considered the first significant medical contribution to be printed and published in Texas.

While some considered Dr. Smith a terrible-tempered man who often “bellowed fire,” his patients appeared to love him. His dedication to the medical profession and to his patients was noted in a December 3, 1839 letter written by Mrs. Lucy P. Shaw of Galveston to her mother Mrs. Jane N. Weston of Eastport, Maine:

"We are fortunate in having an excellent physician, Doctor Smith…I am perfectly well now and all our family are well, although we have had so many deaths in our house and the yellow fever has taken away a great many on the island…Dr. Smith has opened up nine bodies, has several phials of the black vomit and has even tasted it. Dr. Smith is perfectly well and has never had any symptoms of the disease, and if it was contagious I think he would…There are ten resident physicians on the island…but we think we have found the best."