William Thornton, M.D. Papers
JavaScript is disabled for your browser. Some features of this site may not work without it. 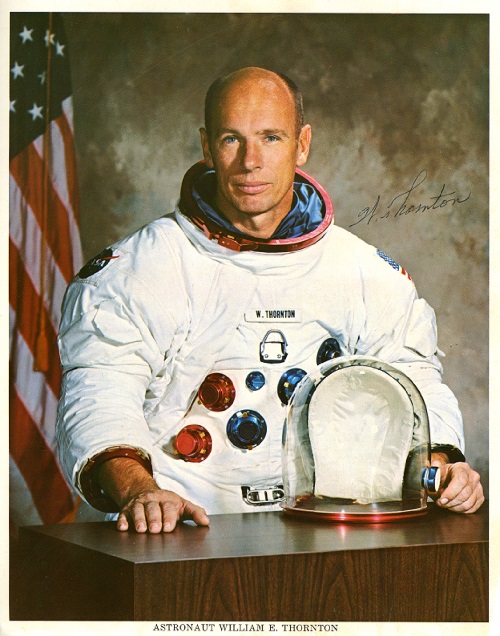 William Edgar Thornton, M.D. was born on April 14, 1929 in Faison, North Carolina. As a kid, he showed an interest in electronics and would fix the radios and televisions of his neighbors. In high school, he opened a radio repair shop and used the profits to pay for college. He earned a Bachelor of Science degree in physics in 1952 from the University of North Carolina. Dr. Thornton enlisted in the United States Air Force where he served as the officer-in-charge of the USAF Instrumentation Laboratory at the Flight Test Air Proving Ground at Elgin Air Force Base, Florida. In working to improve air-to-air combat defenses, Thornton discovered that rockets could be tracked by radar. He developed the Radar Optic Firing Error Indicator (ROFEI), or Thornton Scorer, which was the first practical means of evaluating and maintaining the accuracy of interceptor aircraft. The Thornton Scorer was highly successful and Thornton, as a Second Lieutenant, was awarded the Legion of Merit in 1956.

After leaving the military in 1956, he worked as the chief engineer of the electronics division at Del Mar Engineering Labs in California. In 1959, he decided to continue his education and enrolled in medical school at the University of North Carolina. After graduating in 1963, Dr. Thornton returned to active duty and was sent to the USAF Aerospace Medical Division at Brooks Air Force Base in San Antonio. He was assigned to a project charged with determining how to weigh things (and people) in a weightless environment. In 1964, as a member of the USAF Space Medical Research Project, he invented the Linear Spring Mass Pendulum, or mass scale, which did not weigh objects in the conventional sense, since weight, or the way it had always been measured, depended on the force of Earth’s gravity. What the mass scale measured was the quantity of mass of an object. Once the mass was metered, a translation of the findings into ounces and pounds or grams and kilograms could be made through the use of a conversion table.

Dr. Thornton was selected as a member of the second class of scientist-astronauts in 1967. Following budget cuts to the space program and a surplus of astronauts, this new group of astronauts was told that they were not likely to fly into space. Therefore, they called themselves the “Excess Eleven” (“XS-11”).

In 1972, he, along with astronauts Bob Crippen and Karol Bobko, participated in the Skylab Medical Experiment Altitude Test (SMEAT), a 56-day simulation of an American Skylab mission at NASA’s Manned Spacecraft Center in Houston, Texas. During this experiment, the astronauts simulated space experiments, housekeeping, and leisure activities in a hypobaric chamber.

Ultimately, Dr. Thornton logged over 313 hours in space aboard two missions; STS-8 Challenger (August 30-September 5, 1983) and STS-51B Spacelab 3 Challenger (April 29-May 6, 1985). During the STS-8 mission, he was responsible for making continuous measurements and investigations of the adaptation of the human body to weightlessness. These experiments included a number of first time measurements on the human nervous system while in space. During the Spacelab 3 mission, Dr. Thornton’s responsibilities included the management of the first animal payload in manned flight.

Dr. Thornton holds over 60 issued patents that cover a wide range of applications from military weapons systems to the first real-time EKG computer analysis. His space related patents include the Shuttle treadmill for in-flight exercise, shock and vibration isolation systems, and an improved waste collection system.

In May of 1994, Dr. Thornton retired from NASA and became a Clinical Professor of Cardiovascular Physical Diagnosis at UTMB. In an effort to improve learning, he developed a hybrid hardware/software system simulating the process of auscultation. This system, commonly referred to as “heart sounds,” allows students to see, hear, and feel a virtual patient’s heart beats using real stethoscopes and specifically designed transducers. Current medical students continue to use this system as a part of their second year coursework.

This project is made possible by a grant from the U.S. Institute of Museum and Library Services to the Texas State Library and Archives Commission under the provisions of the Library Services and Technology Act. (2018)

Sub-communities within this community

Collections in this community